Joe LoCicero is one lucky man who found the love of his life via his career. He fell in love with his co-star Gina Rodriguez on the set of ‘Jane the Virgin.’ While many of us are thankful to the production team of the series for the iconic show, Joe is grateful for what he achieved from the show. Their real-life love story is as beautiful as their on-screen romance, and to know more about their personal details like age and net worth, read till the end.

Who is Joe Locicero from Jane the Virgin? Age and family

Joe Locicero can be known as an actor who has appeared on television series like ‘Jane The Virgin.’ He can be known as a model, fight choreographer, and screenwriter. Besides, being the husband of Gina Rodriguez has also added some value to his fame.

Being born on August 9, 1986, he is 34 years old at the moment. However, in less than a month, he will be running in his mid-thirties. The actor was born and bred up in New Jersey, United States; hence, he has American nationality. His parents are the native of New Jersey, and he belongs to white ethnic group.

With the charming looks, Joe had also worked as a fashion model before he was offered acting credits. Besides, he has appeared in dozens of national and international commercials. Having more than 17 credits as an actor, his net worth is estimated to be around $500,000. Moreover, being a celebrity is an asset to itself, as you get to collaborate with many brands, and they pay a massive amount for their promotions.

Wedding and married life with his wife, Gina Rodriguez

Joe Locicero and Gina Rodriguez have an adorable love story that you would want to know about. The couple first met on the set of ‘Jane the Virgin.’ His wife was on the lead role of the popular series while he was there for a short part. He played the role of a stripper, Alien Solider Man, Masked figure, and many more from 2016 to 2019.

According to sources, they first notice each other while he was portraying the role of Don Quixote, the stripper on the second season. However, nothing clicked between them at that period. After six months, they just started to get along when they were shooting in the boxing gym together.

The love birds dated for two years and got engaged in 2018. They announced their engagement with People. Later a year after getting engaged, the couple took the next step in their relationship, and they married on May 4, 2019. They had an outdoor wedding ceremony with their close friends and family; however, it was quite an intimate one with not many public exposures. Furthermore, Gina mentions that she is very thankful for the show Jane the Virgin and mentions,

“Jane gave me a lot of things, not only an amazing life and a dream come true, but they gave me my love, the love of my life.”

Gina, popularly known as the Jane of the Netflix series ‘Jane the Virgin,’ is an American actress and a director. She is from Chicago but has Puerto Rican descent. The actress is now 36, as she was born on July 30, 1984. Her role as a Jane was widely acclaimed, and she even received a Golden Globe Award in 2015 for the series.

Rodriguez started her career as a dancer with a local salsa group called ‘Fantasia Juvenil and even performed for companies like ‘Los Soneros Del Swing’ in Chicago. Her official career as an actor began when she got a role in Tiny Dancer, where she played Frida Kahlo. Following this, in 2011, she portrayed the role of Rita in the series ‘Happy Endings.’ However, it was only after her role in Jane the Virgin that she raised to fame. Moreover, Gina has a net worth of $5 million, being a notable actress. 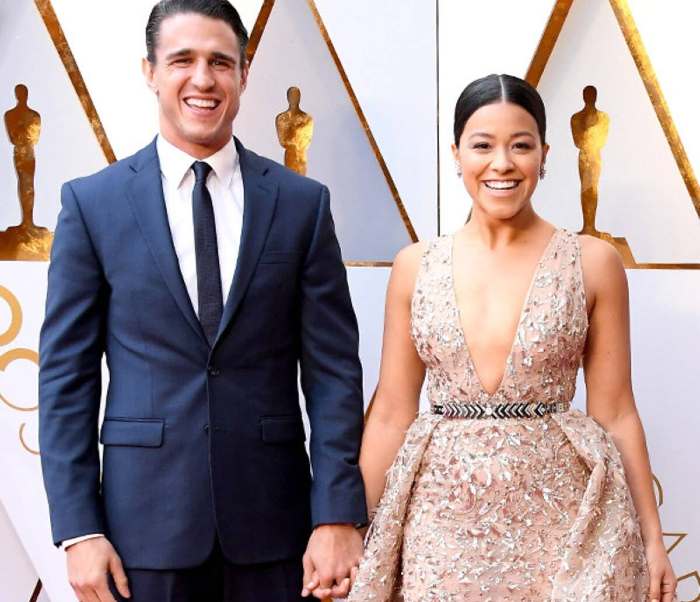 The lead actor from Jane The Virgin, Joe Locicero, and his wife, Gina Rodriguez

Joe as a kid, had great ambitions to enter Hollywood. His career began after he stepped onto the modeling career. He worked for high-profile fashion brands like Juicy Counter, Tommy Hilfiger, Abercrombie & Fitch, and many more. After a successful career as a model, his acting career began in 2013 when he was offered a short role in the film ‘Hector: Lost Souls with Switchblades.’ Later in the same year, he portrayed the role of Sheriff’s Deputy in the TV series documentary ‘A Crime to Remember.’

Furthermore, you might have noticed him on the TV Series ‘Kingdom,’ ‘The Bold and the Beautiful,’ and ‘Jane the Virgin.’ Besides, he also has a writer credit for ‘Cop Chronicles: Loose Cannons: The Legend of the Haj-Mirage.‘ The actor’s name can also be tagged as a fight choreographer, as he has choreography credits for the movie ‘Spaghettiman.’

Physical appearance plays a huge role in your career if you’re a model and an actor. However, Joe has it all. He stands at a towering height of 6 feet 1 inch and weighs about 82 kg. In addition, 44-32-15 is his chest, waist, and biceps measurements, respectively. Besides, he looks dazzling with dark brown hair and hazel colored eyes.